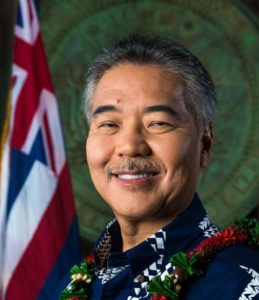 Governor David Y. Ige was sworn in as the eighth governor of the State of Hawai‘i on December 1, 2014.

Governor Ige is focused on improving the lives of Hawaiʻi’s people and making the islands a place future generations choose to call home. He is increasing affordable housing, reducing homelessness, moving toward the state’s 100% renewable energy goal, and remodeling public education to prepare students for the innovation economy of the 21st century. Under his leadership, the state has aggressively moved to ensure financial sustainability and enable future growth. He believes that we can achieve our shared goals because we have always been better together than alone.

Governor Ige was born and raised in Pearl City and is the fifth of six sons of Tokio and Tsurue Ige. He is the first governor in the United States of America of Okinawan descent. He attended public schools in Pearl City and earned a Bachelor of Science degree in Electrical Engineering at the University of Hawaiʻi at Mānoa, where he met his wife, Dawn Amano-Ige.

After college, while working for GTE Hawaiian Tel, a career that spanned 18 years, Governor Ige earned a master’s of Business Administration degree in Decisions Sciences at UH Mānoa. In 1986, Hawaii Business magazine named him one of the university’s Top 10 MBA students. He went on to become a successful electrical engineer and project manager with a 34-year career devoted to information technology, telecommunications, networks, and responsible public policy.

Governor Ige began his political career in 1985 after being appointed by then Governor George Ariyoshi to fill a vacant seat in the Hawai‘i House of Representatives. In 1994, then Representative Ige was elected to the Hawai‘i Senate where he represented his home district of ‘Aiea / Pearl City until 2014.

Governor and Mrs. Ige have three children, Lauren, Amy and Matthew, who are currently pursuing their careers on the mainland.