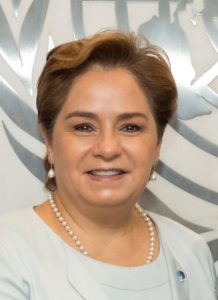 On 18 May 2016, the United Nations Secretary-General appointed Patricia Espinosa Cantellano of Mexico as Executive Secretary of the United Nations Framework Convention on Climate Change. The appointment has been made after consultation with the Conference of Parties through its Bureau.

She succeeds Christiana Figueres of Costa Rica to whom the Secretary-General expressed his sincere gratitude for her invaluable support and dedication in restoring confidence in the international climate negotiations, successfully catalysing cooperation among Governments and all sectors of society in bringing forward commitments and climate action plans, supported by a modernized climate secretariat.

Playing a pivotal role, her leadership and personal commitment contributed in supporting the Secretary-General, the United Nations System and Parties to the Framework Convention in securing the historic and universal United Nations climate agreement in Paris in 2015.

Ms. Espinosa brings to her new appointment more than 30 years of experience at the highest levels in international relations, with a specialization in climate change, global governance, sustainable development, gender equality and protection of human rights. Currently serving as Ambassador to Germany (since 2013 and from 2001 to 2002), she was Minister for Foreign Affairs from 2006 to 2012.

As Mexico’s representative in multilateral bodies and international organizations in Vienna, Geneva and New York, Ms. Espinosa has been engaged as a leader in the global challenge to address climate change and its consequences, notably as Chair of the sixteenth Conference of the Parties to the United Nations Framework Convention on Climate Change leading to the adoption of the Cancun Agreements. Named by the Secretary-General to the High-Level Panel of Eminent Persons on the Post-2015 Development Agenda, she is a tireless supporter of multilateralism as a way to improve conditions for development in all regions of the world, understanding the inextricable link between the aims of the Paris climate agreement and the Sustainable Development Goals.

Previously Ambassador to Austria, Slovakia, Slovenia and United Nations Organizations in Vienna (2002-2006), she was Chief of Staff to the Under-Secretary for Foreign Affairs, Ministry of Foreign Affairs (1989-1991) and responsible for economic issues at the Permanent Mission of Mexico to the United Nations in Geneva (1982-1988).

Born in 1958, Ms. Espinosa did her postgraduate studies in international law at the Institut Universitaire de Hautes Études Internationales in Geneva and holds a degree in international relations from El Colegio de Mexico.